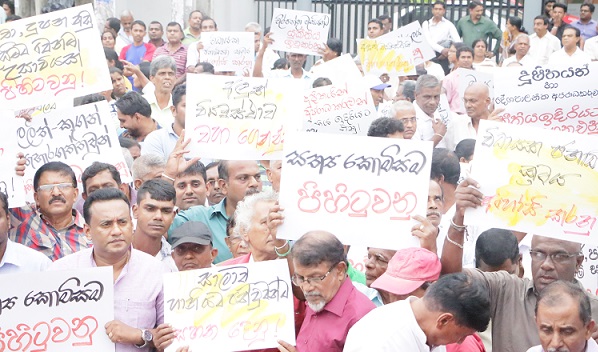 It is true that the era that ends with the introduction of the 20th Amendment cannot be considered as an era of democracy. However it was a period of struggle for democracy filled with mass struggles and out right treachery. Ranil was fortunate to get the support of Samasamajists and radical left to defend the democratic steps taken, including the 19th amendment. On the other hand, the new era that begins with the 20th Amendment, cannot expect to be an era in which the system of democracy will survive at all in its true spirit.  It could herald a period in which a system of dictatorship will assert. There can be a qualitative difference between the period ending with the 19th Amendment and the one that begins with the 20th Amendment.

Since independence, Lanka has generally been regarded as a country which has held elections continuously. That made many consider Lanka to be a democratic country. Of course the rulers who have asserted power from time to time have been elected by popular vote, it cannot be said that much of the country’s affairs since independence have been carried out in real freedom and democracy.

In a western democratic sense, though Lanka was used to democracy with the tradition of GAM SABHA at the time it gained independence, was not in a developed stage capable of maintaining a system of self-governance of its own and the situation did not improve much. Compared to the Indian Independence Movement, the Independence Movement of Ceylon steered by the National Congress was in a backward position. There were many leaders who had a theoretical understanding of liberalism among the leaders of the Indian Independence Movement and it can be said that there was hardly a single person among the leaders of the National Congress of Sri Lanka who understood liberal principles, though Samasamajists   played a revolutionary democratic role.

The Ceylon National Congress was not an advocate of democratic rights, nor did it play a vital role in the socialization of democratic values. In a democratic sense, it remained at such a backward stage that it strongly opposed even the granting of universal franchise to Sri Lanka. That struggle was done by the movement led by Samasamajists. Despite Sri Lankan society remaining poor in terms of democratic values on the eve of independence, because of the power Samasamajists, the British conferred a fully-fledged Westminster-style parliamentary system of governance to Sri Lanka when they left it granting independence.

At that time, it was mostly the English speaking community who constituted the backbone of the public service, especially in the Judiciary of Sri Lanka. After independence, there was a marked decline in the public service, particularly in the judiciary due to a large number of not only the Europeans but also the Burghers leaving Sri Lanka. The departure of the Burghers who could be considered an ethnic group enriched with liberal attitudes has been an important factor in weakening democracy in Sri Lanka.

It was after the establishment of a presidential system of governance in 1978 that the democratic character of the people’s representatives was completely overturned. Along with that, the Parliament lost its supremacy and became a mere rubber stamp of the President. It was Samasamajists who led the struggle against this treachery. Vickramabahu led a group, in hoisting black flags and distributing leaflets exposing the attack against democracy. Bahu was imprisoned at Bogambara prison and expelled from the post of senior lecturer at the engineering faculty, Peradeniya. This repression was rectified only by the last government of RANIL Wickramasinghe.

Under the circumstances, probably to keep the parliamentarians happy, a system of granting privileges, special rights and immunities, which were contrary to law and accepted democratic traditions and conducive to corrupt the character of people’s representatives, was created. This eventually led to making the MPs businessmen transacting dubious businesses with the government, illegally.

Furthermore, the laws that restricted spending on elections by candidates contesting elections, the system of auditing of funds received and expended by political parties were abolished creating an atmosphere for candidates to gang up with the dealers of black money.

This situation led to change not only the nature and the character of the Parliament but also that of the State itself. The contest for State power became a fierce struggle for the right to plunder public property, in addition to the right to rule the country. Thus, the looting of public property which is under temporary custody of the rulers became a regular feature of the State rule in Sri Lanka. The changes that had taken place in this way did not come under protest but the acceptance of the MPs. Since then, all reforms added to the political system (including the 19th Amendment) can be considered as ostentatious fabrications intended to conceal the true nature of plunder being carried out in the name of public administration, and to give the system a quasi-democratic appearance.

In almost every country indicated above except Sri Lanka, Election Commissions have been set up with comprehensive powers to monitor the spending of funds of political parties by candidates on elections, to determine whether the internal affairs of political parties are conducted in accordance with the respective constitutions of political parties, and to investigate into incidents where MPs doing business with the government in violation of the law.

However, it is interesting to note that the Elections Commission of Sri Lanka has been set up in such a way that it does not have wide powers outlined above. It must be said that the real status of all other commissions is also not much different. Democracy that prevailed prior to the 20th Amendment was unable to do justice to Shani Abeysekera.

Corruption in Sri Lanka has become an uncontrollable menace because people’s representatives who are at the helm of State rule have openly adopted a policy of plundering public resources in their custody and disposal. Regrettably, the reforms introduced to the system of governance since 1978 have not been conducive to change this uncivilised status, except to strengthen it further.